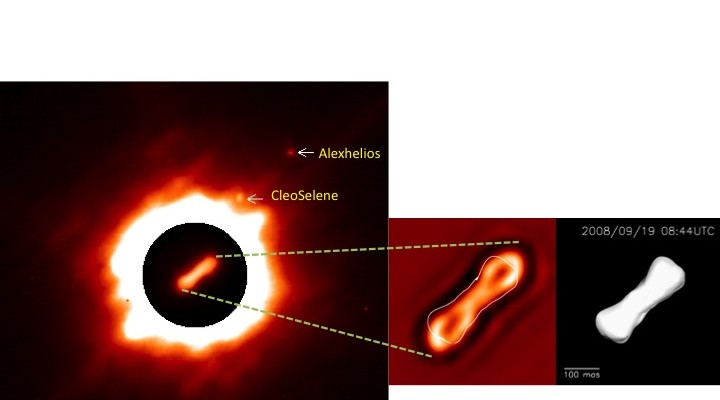 An image of the asteroid Kleopatra taken by the Keck II telescope with adaptive optics, before (left) and after processing. The asteroid, shaped like a dog bone, has two moons, the outer Alexhelios and the inner Cleoselene.

Berkeley — The asteroid Kleopatra, like its namesake, the last pharaoh and queen of Egypt, gave birth to twins – two moons probably spawned by the asteroid sometime in the past 100 million years.

In the February issue of the journal Icarus, a team of French and American astronomers, including Franck Marchis, a research astronomer at the University of California, Berkeley, and Pascal Descamps, an astronomer at the Institut de Mécanique Céleste et de Calculs des Éphémérides (IMCCE) of the Observatoire de Paris, report the discovery and also confirm earlier reports that the asteroid is shaped like a dog bone.

In addition, the team’s detailed study of the asteroid using small telescopes as well as the large Keck II telescope is Hawaii allowed it to determine the precise orbits of the twin moons and calculate the density of Kleopatra, showing that the asteroid is probably a big pile of rock and metal rubble.

“Our observations of the orbits of the two satellites of 216 Kleopatra imply that this large metallic asteroid is a rubble pile, which is a surprise,” said Marchis, who is also a planetary scientist at the SETI Institute in Mountain View, Calif. “Asteroids this big are supposed to be solid, not rubble piles.”

The Committee on Small Body Nomenclature of the International Astronomical Union accepted the proposal of Marchis and his collaborators to name the moons after Cleopatra’s twins by Mark Antony: Cleopatra Selene II and Alexander Helios. The outermost moon is named Alexhelios and the innermost moon is Cleoselene. In Greek mythology, Helios and Selene represented the sun and moon, respectively. 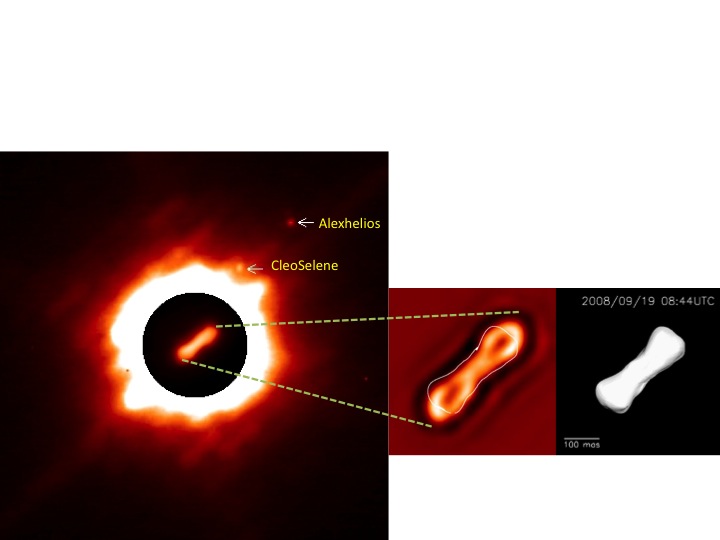 An image of the asteroid Kleopatra taken by the W.M. Keck II telescope and its adaptive optics, after processing. The asteroid, shaped like a dog bone, has two moons, the outer Alexhelios and the inner Cleoselene. The shape of the asteroid is in agreement with the radar-based model shown on the rightmost image.

The proportion of large asteroids in the solar system that are rubble piles is unknown, but the fact that, so far, all multiple asteroids are porous collections of gravitationally-bound chunks could have implications  for how planets form, Marchis said. The collisions between two asteroids are as likely to break up both bodies as to coalesce into one large asteroid, making planet formation a slow process. Rubble piles asteroids, however, would merge more easily during a collision.

“If a large proportion of asteroids in the early solar system were rubble-pile, then the formation of the core of planets would be much faster,” Marchis said.

The rubble pile structure explains Kleopatra’s shape and its two moons, the authors argue. The asteroid probably coalesced from the remains of a rocky, metallic asteroid smashed to smithereens after a collision with another asteroid, which could have occurred anytime since the origin of the solar system 4.5 billion years ago. Based on Descamps’ theory of binary asteroid formation, the rubble pile was set spinning faster by an oblique impact 100 million years ago.  The spinning asteroid would have elongated and slowly thrown out the most distant moon. The inner moon was likely shed more recently, perhaps 10 million years ago.

The asteroid 216 Kleopatra was discovered in 1880 and was shown in 2000 to have an unusual, elongated shape reminiscent of a dog bone. Subsequent radar observations confirmed the shape, but Marchis and his colleagues wanted higher resolution images to determine whether the two lobes of the dog bone are touching or are two separate bodies, and also to calculate the density. Using adaptive optics on the Keck II telescope, the astronomers obtained in 2008 the best images yet and confirmed that the asteroid is one double-lobed body. They also discovered the two moons.

By reanalyzing occultations of other stars by the asteroid, which were observed by smaller telescopes around the world, the researchers were able to refine the size and shape of the asteroid. Some of the observations they used took place 30 years ago.

The team also charted the orbits of the two small moons, each about 8 kilometers across, providing enough information to derive the mass of the asteroid. Given the size, shape and mass, the astronomers then calculated the asteroid’s density: 3.6 grams per cubic centimeter. If the bulk of the asteroid is iron, a common component with a density of about 5 grams/cubic centimeter, then the asteroid is between 30 and 50 percent empty space, the team concluded.

The team continues to observe large asteroids in search of ones with moons, which allows them to calculate the density and determine the prevalence of porous, rubble pile asteroids.

Historical note: In a Feb. 18 circular, the Committee on Small Body Nomenclature of the International Astronomical Union formally accepted the proposal by Marchis and his collaborators to name Kleopatra’s moons Alexhelios and Cleoselene after Cleopatra’s twins by Mark Antony. Alexander Helios and Cleopatra Selene II were born in 40 B.C. to Cleopatra VII, the last pharaoh of ancient Egypt, and Mark Antony, a politician and general from the Roman republic. Cleopatra Selene II, often known as Cleopatra VIII, later married the African king Juba II of Numidia and lived in Mauretania in North Africa. She apparently had two children. Alexander Helios’ fate is unknown.