Intriguing pair of satellites caught with the eVscope

If you often look at the evening dark sky in a clear area far away from the city, you have probably seen a speck of light which moves with respect to the star, that’s probably a distant satellite that shines because it reflects the light of the sun at high altitude. According to NASA’s Orbital Debris Program office, there are an  about 21,000 large debris (>10 cm) and satellites orbiting around Earth right now, so much more than you can see with your naked eye.

The eVscope is designed to pinpoint and image Deep Sky Objects (nebulae, galaxies), but we have already shown its potential to observe dwarf planet like Pluto, as well as asteroid like Florence. Because the telescope can image targets as faint as those astronomical bodies, we thought that it will also be able to image small satellites and debris as well passing serendipitously in the field of view. This is what happened a few days ago.

Our team observed from Pourrieres, 50 km from Marseille on November 15 2017. The goal was to test the eVscope on faint winter-sky objects, which including the iconic Horsehead Nebula. At 22:48 UT, the observer pointed toward the target and saw briefly during the acquisition in the eyepiece a small moving target crossing the field of view.

The SETI Institute team inspected the individual raw frames and tried to identify the target. We quickly realized that this bright target (V~10) was not an asteroid but probably an artificial satellite. 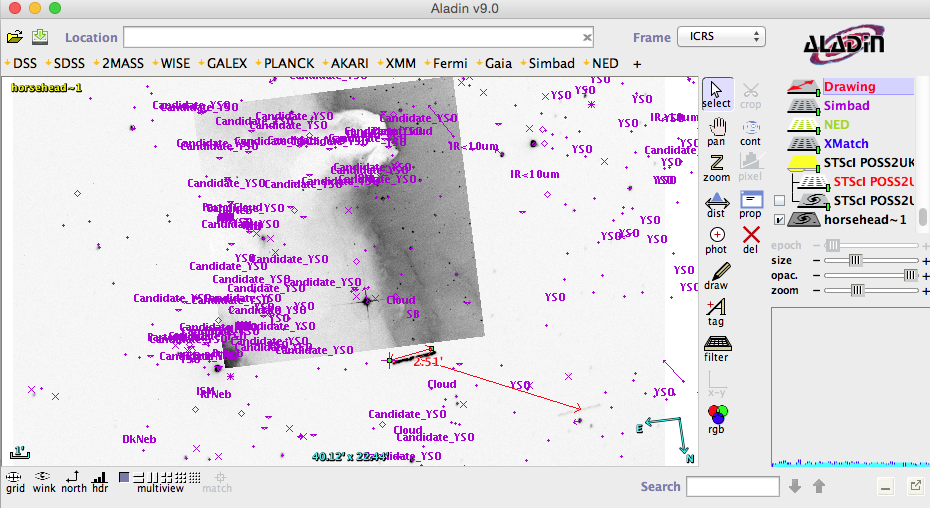 Analysis of one of the frame of the EVscope using Aladin software.

More interestingly when we looked at the data more carefully, we saw a second satellite, 8-10 times fainter, which was moving together with the bright one at 9.8 arcmin and 5’o clock. The motion for both satellites with respect to the star is 1 min per min, so that’s probably a geostationary pair of satellites, even though we noticed that they are both inclined by ~4 deg with respect to the equator.

Mysteriously, we could not identify yet the satellites despite a search in the NORAD database and other tools available on the web. That’s probably something that we will do in the future and I will post regular updates here. If you have an idea, please let us know!

The followup and the characterization of space satellites and debris in orbit around Earth is another possible use of the eVscope. We had mentioned this several times in the past and nature gave us the bit of luck that we needed to show it.

1,500th telescope on our Kickstarter. Thank you!

AI as a Tool for Planetary Defense: How a Computer Could Help Us Make the Right Decisions When Facing An Asteroid Threat