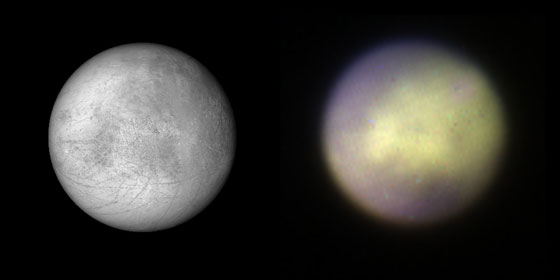 Comparison of Europa observed with Gemini Planet Imager in K1 band on the right and visible albedo visualization based on a composite map made from Galileo SSI and Voyager 1 and 2 data (from USGS) on the left. While GPI is not designed for ‘extended’ objects like this, its observations could help in following surface alterations on icy satellites of Jupiter or atmospheric phenomena (e.g. clouds, haze) on Saturn’s moon Titan. The GPI near-infrared color image is a combination of 3 wavelength channels. Image credit: Processing by Marshall Perrin, Space Telescope, Science Institute and Franck Marchis, SETI Institute

After nearly a decade of development, construction, and testing, the world’s most advanced instrument for directly imaging and analyzing planets around other stars is pointing skyward and collecting light from distant worlds.

The instrument, called the Gemini Planet Imager (GPI), was designed, built, and optimized for imaging faint planets next to bright stars and probing their atmospheres, and studying dusty disks around young stars. It is the most advanced such instrument to be deployed on one of the world’s biggest telescopes – the 8-meter Gemini South telescope in Chile.

“Even these early first-light images are almost a factor of 10 better than the previous generation of instruments. In one minute, we are seeing planets that used to take us an hour to detect,” says Bruce Macintosh of the Lawrence Livermore National Laboratory who led the team that built the instrument. 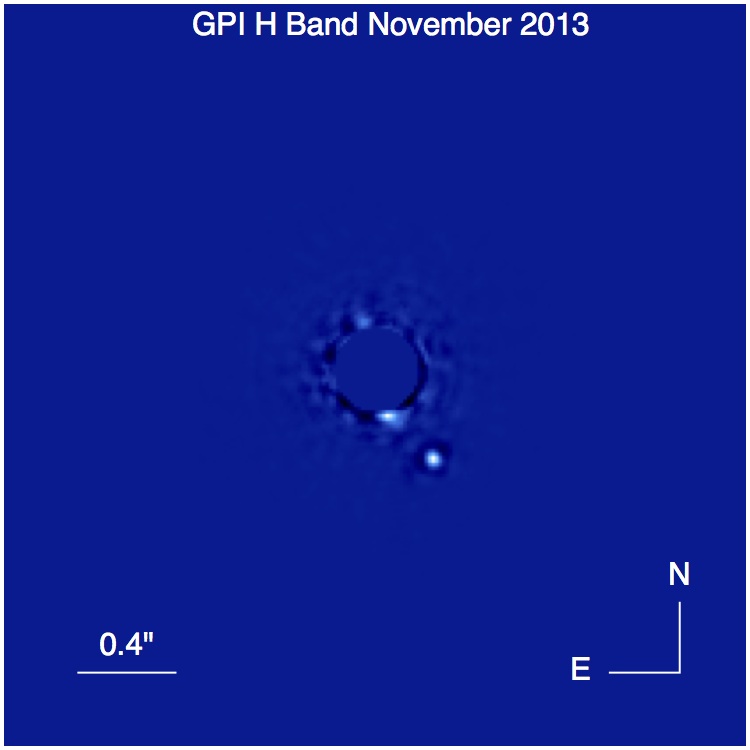 GPI detects infrared (heat) radiation from young Jupiter-like planets in wide orbits around other stars, those equivalent to the giant planets in our own Solar System not long after their formation. Every planet GPI sees can be studied in detail.

“Most planets that we know about to date are only known because of indirect methods that tell us a planet is there, a bit about its orbit and mass, but not much else,” says Macintosh. “With GPI we directly image planets around stars – it’s a bit like being able to dissect the system and really dive into the planet’s atmospheric makeup and characteristics.”

GPI carried out its first observations last November – during an extremely trouble-free debut for an extraordinarily complex astronomical instrument the size of a small car. “This was one of the smoothest first-light runs Gemini has ever seen” says Stephen Goodsell, who manages the project for the observatory.

For GPI’s first observations, the team targeted previously known planetary systems, including the well-known Beta Pictoris system; in it GPI obtained the first-ever spectrum of the very young planet Beta Pictoris b. The first-light team also used the instrument’s polarization mode – which can detect starlight scattered by tiny particles – to study a faint ring of dust orbiting the very young star HR4796. With previous instruments, only the ends of this dust ring, (which may be the debris remaining from planet formation), could be seen, but with GPI astronomers can follow the entire circumference of the ring. The group also observed the system of planets orbiting HR8799.

Although GPI was designed to look at distant planets, it can also observe objects in our Solar System. The accompanying test images of Jupiter’s moon Europa, for example, can allow scientists to map changes in the satellite’s surface composition. The images were released today at the 223rd meeting of the American Astronomical Society in Washington DC.

“Seeing a planet close to a star after just one minute, was a thrill, and we saw this on only the first week after the instrument was put on the telescope!” says Fredrik Rantakyro a Gemini staff scientist working on the instrument. “Imagine what it will be able to do once we tweak and completely tune its performance.”

“Exoplanets are extraordinarily faint and difficult to see next to a bright star,” notes GPI chief scientist Professor James R. Graham of the University of California who has worked with Macintosh on the project since its inception. GPI can see planets a million times fainter than their parent stars. Often described, ‘like trying to see a firefly circling a streetlight thousands of kilometers away,’ instruments used to image exoplanets must be designed and built to “excruciating tolerances,” points out Leslie Saddlemyer of NRC Herzberg (part of the National Research Council of Canada), who served as GPI’s systems engineer. “Each individual mirror inside GPI has to be smooth to within a few times the size of an atom,” Saddlemyer adds.

“GPI represents an amazing technical achievement for the international team of scientists who conceived, designed, and constructed the instrument, as well as a hallmark of the capabilities of the Gemini telescopes.  It is a highly-anticipated and well-deserved step into the limelight for the Observatory”, says Dr. Gary Schmidt, program officer at the National Science Foundation (NSF), which funded the project along with the other countries of the Gemini Observatory partnership. 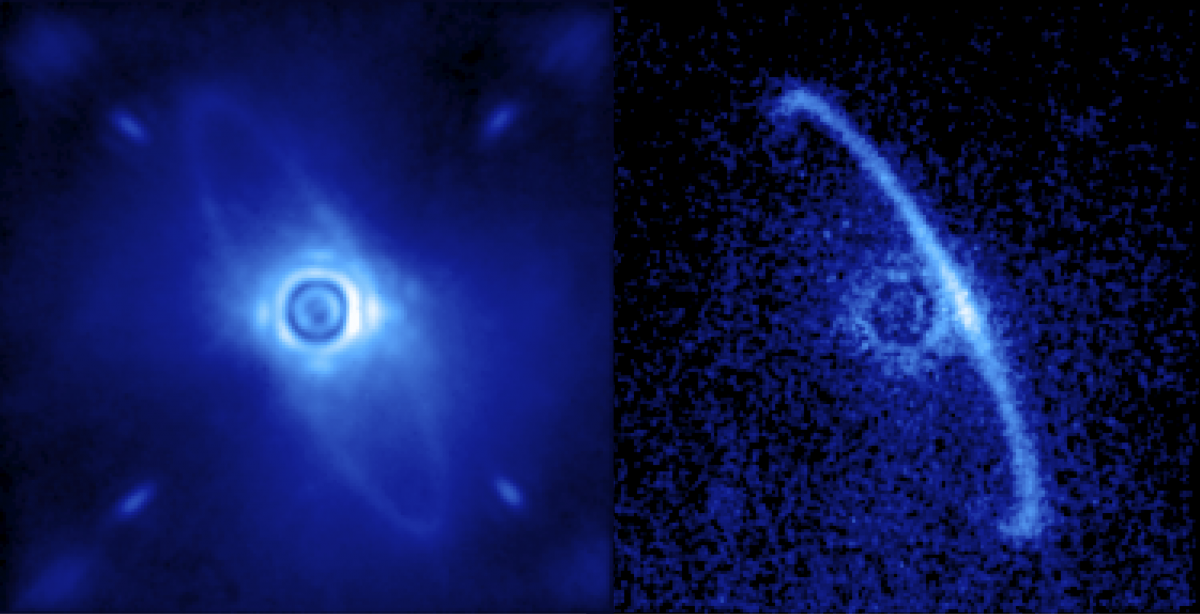 Gemini Planet Imager’s first light image of the light scattered by a disk of dust orbiting the young star HR4796A. This narrow ring is thought to be dust from asteroids or comets left behind by planet formation; some scientists have theorized that the sharp edge of the ring is defined by an unseen planet. The left image (1.9-2.1 microns) shows normal light, including both the dust ring and the residual light from the central star scattered by turbulence in the Earth’s atmosphere. The right image shows only polarized light. Leftover starlight is unpolarized and hence removed from this image. The light from the front edge of the disk is strongly polarized as it scatters towards us. Image credit: Processing by Marshall Perrin, Space Telescope Science Institute

“The entire exoplanet community is excited for GPI to usher in a whole new era of planet finding,” says physicist and exoplanet expert Sara Seager of the Massachusetts Institute of Technology. Seager, who is not affiliated with the project adds, “Each exoplanet detection technique has its heyday. First it was the radial velocity technique (ground-based planet searches that started the whole field). Second it was the transit technique (namely Kepler). Now,” she says, “it is the ‘direct imaging’ planet-finding technique’s turn to make waves.”

In 2014, the GPI team will begin a large-scale survey, looking at 600 young stars to see what giant planets orbit them. GPI will also be available to the whole Gemini community for other projects, ranging from studies of planet-forming disks to outflows of dust from massive, dying stars.

Looking through Earth’s turbulent atmosphere, even with advanced adaptive optics, GPI will only be able to see Jupiter-sized planets. But similar technology is being proposed for future space telescopes.

“Some day, there will be an instrument that will look a lot like GPI, on a telescope in space,” Macintosh projects. “And the images and spectra that will come out of that instrument will show a little blue dot that is another Earth.”

GPI is an international project led by the Lawrence Livermore National Laboratory (LLNL) under Gemini’s supervision, with Macintosh as Principal Investigator and LLNL engineer David Palmer as project manager. LLNL also produced the advanced adaptive optics system that measures and corrects for atmospheric turbulence a thousand times a second. Scientists at the American Museum of Natural History, led by Ben Oppenheimer, who also led a project demonstrating some of the same technologies used in GPI on the 5-meter Palomar project, designed special masks that are part of the instrument’s coronagraph which blocks the bright starlight that can obscure faint planets. Engineer Kent Wallace and a team from NASA’s Jet Propulsion Laboratory constructed an ultra-precise infrared wavefront sensor to measure small distortions in starlight that might mask a planet. A team at the University of California Los Angeles’ Infrared Laboratory, under the supervision of Professor James Larkin, together with Rene Doyon at the University of Montreal, assembled the infrared spectrograph that dissects the light from planets. Data analysis software written at University of Montreal and the Space Telescope Science Institute assembles the raw spectrograph data into three-dimensional cubes. NRC Herzberg in British Columbia Canada, built the mechanical structure and software that knits all the pieces together. James R. Graham, as project scientist, led the definition of the instrument’s capabilities. The instrument underwent extensive testing in a laboratory at the University of California Santa Cruz before shipping to Chile in August.  The SETI institute in California manages GPI’s data and communications. 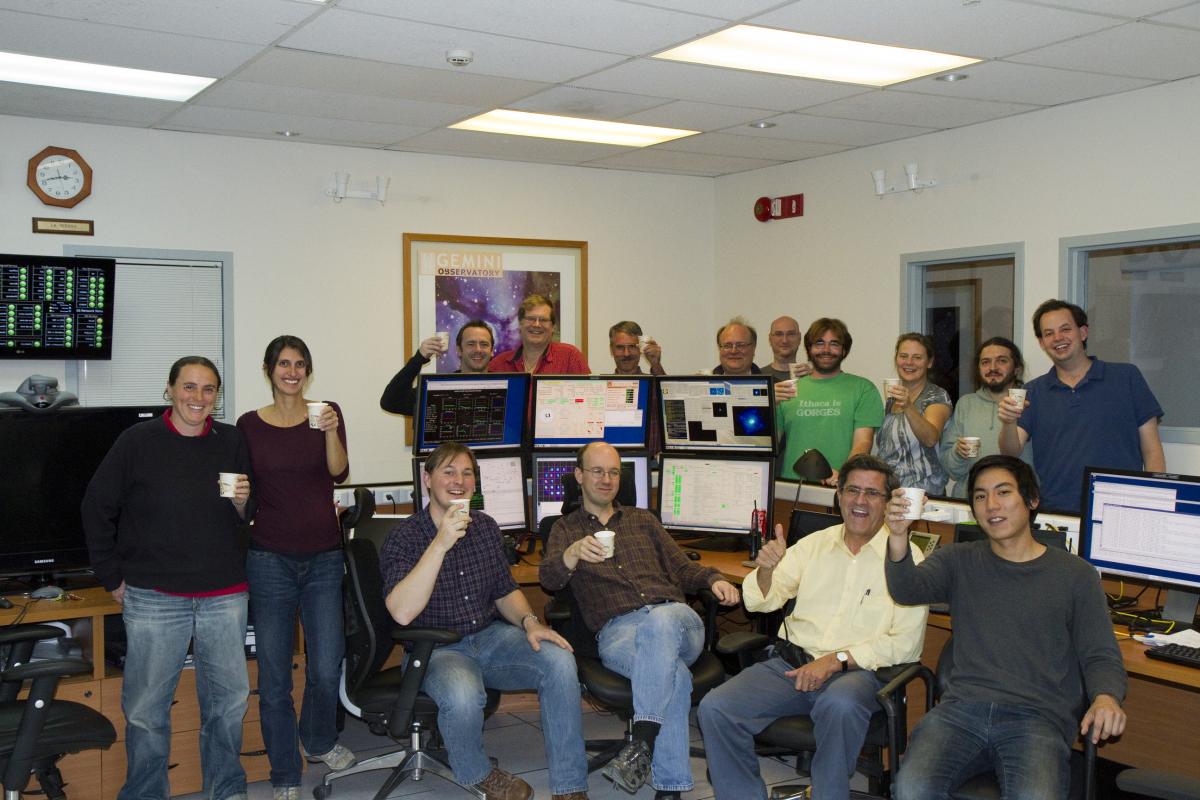 Gemini Planet Imager Exoplanet Survey — One Year Into The Survey