Berkeley — The asteroid belt between Mars and Jupiter is often depicted as a dull zone of dead rocks with an occasional wayward speedster smashing through on its way toward the sun.

A new study appearing in the Aug. 26 issue of the journal Nature paints a different picture, one of slow but steady change, where sunlight gradually drives asteroids to split in two and move far apart to become independent asteroids among the millions orbiting the sun.

A conceptual sketch showing the evolution of a small (D<10km) and rubble-pile asteroid. The parent asteroid made of small component pieces is spun up beyond the critical fission speed by the Yarkovsky-O’Keefe-Radzievskii-Paddack (YORP) effect in tens million years forming a proto-binary system. If the smaller companion is less than 60 percent the size of the larger asteroid, it will gently separate from each other at relatively low velocity due to internal dynamics. The system will become an asteroid pair (or “divorced” asteroid).

“This shows that asteroids are not inert, dead bodies of no interest,” said study co-author Franck Marchis, a research astronomer at the University of California, Berkeley, and the SETI Institute in Mountain View, Calif. “In fact, small asteroids very slowly evolve into binaries and, eventually, divorced binaries.”

Marchis, who studies double- and triple-asteroid systems, teamed up with former UC Berkeley undergraduate Brent Macomber to analyze two pairs of former or “divorced” binaries, which are asteroid pairs that have drifted apart and are no longer gravitationally bound to one another. Macomber, now a graduate student at Texas A&M University, participated through UC Berkeley’s Undergraduate Research Apprentice Program (URAP), which matches students with researchers in need of assistance.

Marchis and Macomber contributed their findings to a group of astronomers in the Czech Republic, who analyzed the evolution of 35 pairs of divorced binaries. The leader of that group, Petr Pravec of the Astronomical Institute in the Czech Republic, and 25 colleagues from 15 other institutions published the results this week, showing that all of the asteroid pairs have similar relative masses and relative velocities that point to a similar origin by fission.

The conclusion fits a theory of binary asteroid formation originated by co-author Daniel Scheeres, a professor of aerospace engineering sciences at the University of Colorado, Boulder. His theory predicts that if a binary asteroid forms by rotational fission, the two can only escape from each other if the smaller one is less than 60 percent the size of the larger asteroid. Of all the asteroid pairs in the study, the smallest of each pair was always less than 60 percent of the mass of its companion asteroid. 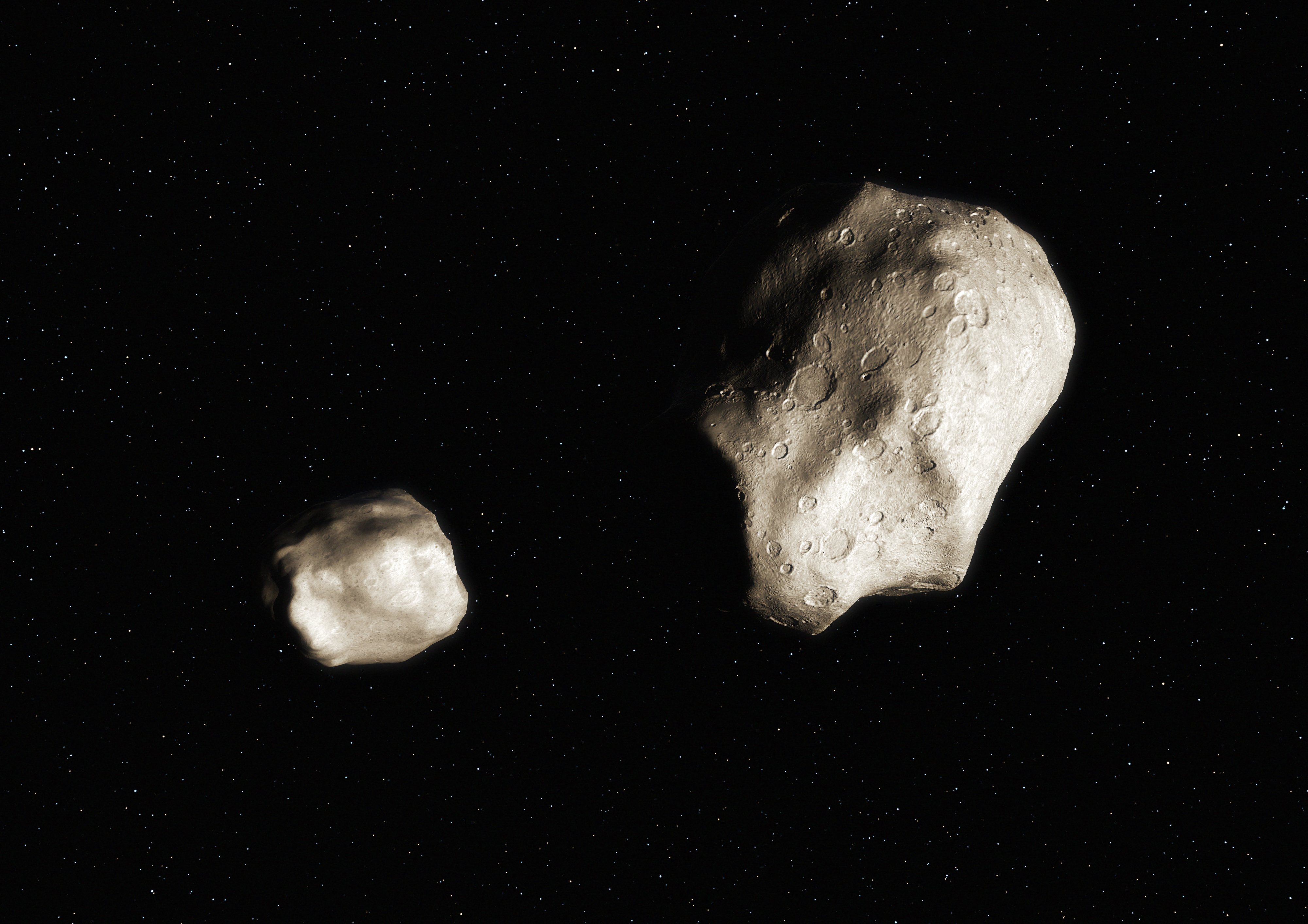 Artistic view of an asteroid pair during its transient proto-binary phase which happened less than 1 million years ago. Typically for this unstable proto-binary system, the primary has a diameter of a few kilometers, while the companion is 60% the primary size or less. Shortly after its formation, the secondary will gently escape forming an asteroid pair which will share the same orbits around the sun. (credit: ESO//L. Calçada)

Of the estimated one million asteroids 1 kilometer or more in diameter orbiting the sun, many are thought to be rubble piles of smaller rocks gravitationally bound together. Previous research has shown that asteroid rubble piles less than 10 kilometers in diameter can start rotating faster because of the Yarkovsky–O’Keefe–Radzievskii–Paddack (YORP) effect: the imbalance between sunlight absorbed on one side of an out-of-round asteroid and heat radiated on the other makes it spin.

“Sunlight striking an asteroid less than 10 kilometers across can change its rotation over millions of years, a slow motion version of how a windmill reacts to the wind,” Scheeres said.

As an asteroid spins up, the equator bulges and the rocks at the extreme edge eventually reach escape velocity and detach. The detached rocks coalesce into a moonlet and, over millions of years, the primary and secondary asteroids “separate gently from each other at relatively low velocities,” Scheeres said.

“This slow process, rather than catastrophic demolition, replenishes the population of binary asteroids, and accounts for the many binaries and ex-binaries that we see,” Marchis said, noting that 10-15 percent of all small asteroids could be binary systems.

The researchers focused on so-called “asteroid pairs”: independent asteroids in the same orbit around the sun that have come close to each other – usually within a few miles – at very low relative speeds at some point in the past million years. Asteroid pairs were first discovered in 2008 by co-author David Vokrouhlicky of Charles University in Prague, Czech Republic, but their formation process remained a mystery prior to the new study.

Suspecting that asteroid pairs were at one point binary asteroid systems, Pravec asked collaborators to measure two characteristics of each of the 35 asteroid pairs: the relative brightness of each asteroid – which correlates to its size – and the spin rates of the asteroid pairs using a technique known as photometry.

The 35 asteroids in the study ranged from about 1 to 10 kilometers (0.6 – 6 miles) in diameter. Observations were contributed by co-authors from institutions in North Carolina, California, Massachusetts, Chile, Israel, Slovakia, the Ukraine, Spain and France.

Macomber’s contributions to research are not unusual for a UC Berkeley undergraduate. More than 1,400 students were involved in research last year in all fields of science, social science and the humanities.

“In the three years that I worked with Dr. Marchis, I got more experience than I could have possibly imagined in all aspects of observational astronomy, everything from planning a night of observations, to collecting data with advanced adaptive optics imagers, to processing the data after the observations are completed,” said Macomber, who obtained his bachelor’s in physics and astronomy in December 2008, worked for a semester with Marchis at the SETI Institute and is now a Bradley Fellow in the Department of Aerospace Engineering at Texas A&M. “The most important thing I learned was how real science works, the process of collaborating with a team around the world to collect observations, analyze them and publish scientific results.”

“When students work with us, they can be involved in state-of-the-art research and make a real contribution to science,” Marchis said.

The contributions of Marchis and Macomber, obtained using the Lick Observatory’s 1-meter Nickel telescope, were supported by the National Science Foundation.

Links and Other resources

Lutetia: a Rare Survivor from the Birth of the Earth